The top two silence fillers from strangers: “Looks like you have your hands full!” (even I have heard this with only two children) and “Never a dull moment, huh?” When did people decide everything needs a comment? Sometimes a helping hand would go further – but that’s a rant for another time. I don’t know that people intend such comments to be condescending, perhaps they are trying to be encouraging in some small way.

However, several times this week, I’ve found myself thinking “never a dull moment” in response to the daily goings-on around here. Although, I guess we’d have to start by defining the “dull” moment. The ordinary. The mundane. Would the dull moments be while doing laundry with the 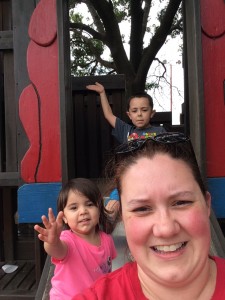 help, or not so much help, of a two-year-old sorting (un-sorting) the clothes – mixing the dirty back with the clean, playing in the dirty ones, and running away with the laundry basket right when you need it? Or would the dull moments be when your big kid creates an amazing train track and tunnel and platform and five minutes later the aforementioned “babyzilla” swoops in, leaving no survivors on Sodor? Is the dull moment when the potatoes are boiling over, the phone is ringing, and the toddler is tantruming? Could it be when she refuses to eat supper every single night for no apparent reason? Maybe it’s when the big boy’s tooth finally comes out, during mealtime. Is it the newfound stalling tactics at bedtime since the time change? Maybe the dullest of all the moments is when the six-year-old is jabbering about who knows what and the two-year-old opens a drawer, pulls out the superglue, gets the lid off, AND licks it! (This resulted in a “just in case” call to poison control. By the way, if your child licks super glue, it should immediately crystallize. Wipe off the crystals and have them drink plenty of fluid. Why she licks everything right now, I will never understand. Other Babyzilla antics of late include running away in parking lots, eating off the floor, licking cars, smearing bananas on the table, splashing in puddles with both her hands and feet then licking her hands).

These are the moments that make up the days of the stay-at-home mom. These moments keep life going at a crazy pace where the days are long and the years are short. These moments make the quiet of the early morning or late nights a time to breathe in peace and joy and thankfulness. Such “dull” days are exhausting, but also full of fun and laughter and snuggles and learning. I wouldn’t trade my dull days for anything.

A version of this post was featured on Project Underblog on June 15, 2015

Too Soon or Not Soon Enough
Tags:parenting, parenting adventures, stay at home mom, what to do if your child eats superglue