Too much of “religion” these days focuses on how a person “feels” and on the “worship experience” rather than Teaching the Truth. If the people in attendance experience entertainment, give generously, serve wholeheartedly, even love unconditionally, but leave the assembly with a dull sword and tattered armor, is that congregation fulfilling the mission of Christ?

The assembly is like a training exercise though it should not be the only place we develop our skills for battle. The soldier of Christ needs to verify what the sergeant (preacher) says, dedicate him/herself to the study of the Word, and question anything said in opposition to the Word. The soldier does not (or should not) only do Physical Training (PT) with the unit at Dark Thirty, but also after hours and on holidays, to keep the body battle-ready. Soldiers have a “battle buddy” and often remain connected and accountable to one another even after the danger of deployment is over.

You would not walk through enemy territory without battle rattle (armor). We cannot be prepared for the spiritual warfare going on around us if we do not have the right equipment. You would not go into battle without first being trained. You would not stand on the front lines without an adequate weapon. Be battle-ready, in all seasons. The enemy prowls like a lion, seeking those he may devour. Don’t let yourself be his next meal. Learn so that you may teach others, freeing them from the Enemy’s snares. 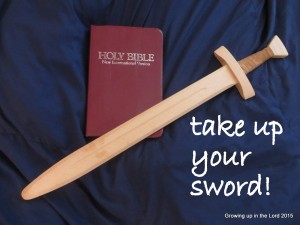 Does your congregation focus more on the experience of worship than the mission of Christ? Do you leave feeling good, but lack knowledge of the Word? If either of those is the case, I recommend opening your Bible and seriously studying to find God’s Way, rather than that of men.

The War Zone of Parenting

Becoming and Unbecoming an Army Wife
Tags:armor of God, take up your sword

Unseen (the story behind the story)

Pride cometh before a Minecraft Fail