Today a bird flew into the house. This is not my house. We are currently staying with my father-in-law though we are nearing the end of this transitional time (we move next month). To some people, a bird in the house probably is not all that exciting or challenging of an obstacle, but I am not those people. 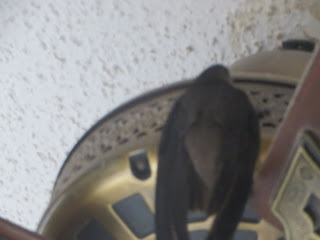 Around three o’clock, I’d had it. Between my two-year-old’s refusal to nap and my almost seven-year-old’s devotion to the Wii Universe even I tired of my own voice telling them the same things over and over. I decided we would go outside for a walk. I still repeated myself often. Not long after we came inside and the kids were supposed to be playing with toys in the living room, I saw something zoom across the kitchen and land by the sink. I wanted to scream, because it seemed that my “No throwing in the house” and “No toys in the kitchen” rules had been broken simultaneously. Instead, I firmly, but not so calmly yelled, maybe through a partially clenched jaw, “WHAT was THAT?” To which my darling big boy says, “I think there’s a bird in the house!” I check it out, at first seeing nothing, then realize the bird is perched vertically on our new nebulizer box. I attempted to throw a towel over it to catch it and get it out of the house. Whoops and hollers from across the room startled the bird as I threw the towel, sending it flying every which way through the house. During its flight, the two-year-old is trying to climb me in a panic, the seven-year-old is doing what appears to be a Native American bird trapping dance and chanting around me, and I’m trying not to be in the way when the creature swoops. I don’t mind birds, really, but they belong outdoors and not dive-bombing toward my head. You saw the movie, right? The bird took up residence on the ceiling fan and remained there (I am not quite 5’2”) until Grandpa came home and rescued us all. He made the entire thing look easy, tapping the fan blade and opening the front door (after the bird hit the glass) to let it out.
Adventures like these always happen when the husband is away when you are alone, or otherwise at the worst possible time. (Single mamas out there, working and doing all the mama jobs, and dealing with the mass chaos with no one else to pick up the slack, you have my highest respect.) I’m not a stranger to mass chaos erupting. Until seven months ago, I lived as an army wife. I survived three deployments and many more field exercises and other training classes that kept my husband away for more than a few days at a time. Our shortest separation in military life was only one week. All matters of maintenance and upkeep suddenly fall apart when the husband leaves. Creditors call only wanting to speak to him and are not satisfied with the answer, “No, I do not have a number where you can reach him. He’s in a war zone!!!!” The majority of both my pregnancies occurred while Peter was deployed. At least he arrived in time for the births. Not all military spouses can say that.
The magical hour for many stay-at-home moms is between five and six o’clock. I am blessed to stay home with my children, to provide them with one parent that is always present because the life of an active-duty soldier does not have set hours. Weeks, months, and years of separation add up quickly. Without a support system, I would never have a five o’clock.
Through our times of separation, routines changed. Children pick up on everything mama feels, no matter how well she thinks she’s hiding it, how put together she tries to appear. Sleep is disrupted for everyone in the house. Appetites and tastes run amok. Fears emerge in the previously courageous child. Even now with our brief separation during the week as my husband works in another town until our new place is ready to move into, the kids have decided bedtime is somewhat optional. My almost seven-year-old continues to believe he is an adult by the way he speaks to me. Undoing and resetting once we finally settle down will take time and patience. Eventually, routine will be reestablished, the rubble and debris of the eruption will settle, and five o’clock will come once more.

The Myth of Super Mom
Tags:transitions

When Nothing is Everything