Transitions are full of complications. The rescheduling (or unscheduling?) of our original moving plans aside, other things also seem to be working against us. Because the kids are both growing, and both fiercely independent, the power struggles intensify daily. From the moment Madilynn wakes up (lately before 6:30) to the moment they both stop fighting going to sleep with, “I have to tell you one more thing.” or in Madilynn’s case, crying since she’s beyond tired – since, oh yeah, in addition to the early rising, she thinks she shouldn’t take a nap anymore.
I recently connected with another a blogger who participates in a weekly linkup called Seven Quick Takes (SQT). The idea is to wrap up the week (or past seven days) with seven quick thoughts from those days. In continuing with my attempts to be more positive, I am participating in today’s linkup. 1~
On Monday, my first outside published piece debuted on Mamalode. (My cousin and cousin-in-law pointed out a vulgar poster for sale in the shop. I do not have control over their sales or ads. If however, you ever see an offensive ad on this blog, let me know!).
~2~
On Tuesday, I received a call that our household goods shipment had arrived at the local moving company! Apparently, my name wasn’t on the shipment paperwork, so Peter had to call to set up the delivery. Our move will really be complete on June 1.
~3~
Since I have nothing else to do, the kids and I took a two-hour drive to deliver a load of stuff and to vacuum the apartment. I hope I succeeded in getting some of the chemicals out of the carpet. I also left a diffuser behind to help with the “apartment odor” (which is not helped by all the humidity).
~4~
Madilynn learned how to jump off the ground with both feet!
~5~
While Dietrich fought me about doing school work today, I told him he could either do work on the computer or worksheets. He chose worksheets. That backfired slightly because I had to print them out since I already took the workbooks to the apartment (go-go overexcited mommy!). He did his addition worksheet (and only had to correct one) in record time!
~6~
Even though Madilynn is attempting to give up naps and waking up at or before 6:30, she is usually going to sleep a little sooner at night… sometimes. In the morning, she comes in and snuggles with me, sometimes she goes back to sleep and other times I give up before 7:00.
~7~
Madilynn likes to help me with chores around the house. Her help amuses me. About halfway through the task, she asks me for help. I enjoy watching her learn. 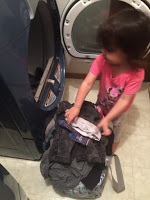 Combining the normal everyday challenges of parenting with the stresses and frustrations of this will be eight months of living in transition has been a unique experience – one I hope to never repeat. Even so, I don’t want to have regrets wondering if I missed something during these long days when the years will seem to fly by (or so I’m told by those older and wiser). I’m going to be looking for more moments to make memories so that limiting myself to only seven things becomes the real challenge.

SQT ~ the Purge and setting up house

In Memory of Grandma
Tags:parenting, transitions

A foolproof investment for the future