I’m often amazed at how much Dietrich has faced/endured. He is four years and nine months – give or take a few days – or 57 months. Of that time, Peter has been deployed 29 months (this is only deployments, not extended training or classes that take two to three weeks at a time). For those of you doing the math (or too lazy to do the math), that works out to half of D’s life. Dietrich is a smart, loving, creative, often strong willed boy. He relates better to adults or older children than his own age group (that’s one reason he goes to Kindergarten and the only reason I force “play dates” on him) because for so long, he just had me (and extended stays with my parents or grandparents). I wouldn’t change anything about him, or even our lives – even when it’s challenging, we are so very blessed. 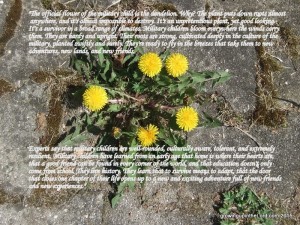 Time is a funny thing, made even more ambiguous when counting deployment months. In some ways, the past almost six years seems an eternity. In other ways, not as much. Sometimes, I have to remind myself that Dietrich is still very much a little boy, not the mini-adult he acts like or tries so hard to be. I want him to just be a kid and have fun, but also grow up into a responsible adult.

A friend of mine posted the following about her family’s military journey, “I always tell the girls that our new best friends are waiting for us to get there. I like to think of it as we get to meet so many people we never would have known had we stayed in one place. We have been blessed tremendously, but saying good-bye is NEVER easy.” A quote I often see is “Military children will say goodbye to more significant people by age 18 than the average person will in their lifetime.”

In the past year, we have seen over six families move to a new duty station. Dietrich seems to take it all with an easy going flare, though occasionally still asks to go see those people. He remembers where their houses were, and if we are driving in that direction, he asks if that is where we are going. He remembers things we did with different people. The memory on that boy has astounded me for about three years now.

We serve with Peter, for Peter. We know the importance of family time. We know the necessity of communication. We know the patience derived from the “hurry up and wait” mentality of the military. We know the endurance of getting through 9,12, and even 15 months apart. We know independence and interdependence – when to rely on ourselves and when to ask for help. We know sacrifice. We know the discouragement of being unappreciated, overworked, and unrecognized – still waiting on a promotion “guaranteed” five years ago. We know how to live within our means, though that “means” is barely above the poverty line. We know loneliness. We know the indescribable excitement of a phone call, the anxiety of days without a word, and the overwhelming joy of reunion.
I’ve learned when and how to hold my tongue when other wives complain that their husband is working late or away for the weekend. I’ve gained deeper empathy for single mothers as they attempt to balance every part of life and be both mom and dad. I’ve developed more reliance on God and His church, both in daily life and during the difficult times.  This past week, I finished up with scrapbooking pictures printed in 2010. I struggled with some of this, as Peter isn’t in most of those pictures. I hung our family Christmas pictures from this past Christmas – also ones without Peter. This is our life, our memories. I don’t like the many long separations, but I do try to make each day count. Dietrich and Madilynn, my beautiful dandelions, I pray you have wonderful memories of each season of our lives.
Tags:army life, family

A Very Wordy Wednesday: An Update on our Move

The Time I Did Not Kill the Movers