Once upon a time, on a road trip to see Dennis Jernigan for a New Year’s Eve Night of Praise, my friend Jennifer and I realized 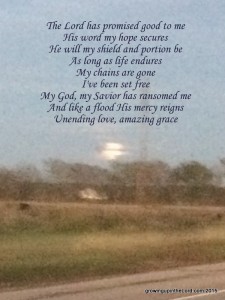 between the two of us, we had about 15 variations of the song “Amazing Grace”. We skipped several of these variations, noting the song is somewhat overdone. The Library of Congress has at least 3000 variations listed, according to Wikipedia, and many experts surmise that the song has been translated in every language where the Christian religion is present. Amazing Grace resonates with many people. It may be difficult to find a person who doesn’t know the tune or a few words of the song because it is so common to our culture. However, on a recent drive, two of the few songs my car would sync from my phone were Celtic Thunder’s variation of Amazing Grace and Chris Tomlin’s Amazing Grace, My Chains are Gone. I skipped neither. Instead, I became overwhelmed with the realization that all sin is equal in the eyes of God. It doesn’t matter if it’s murder, adultery, homosexuality, greed, gossip, lying, anger, selfishness, or any others. All sin separates us from God. Yet God allows us to be redeemed by His infinite Grace. I “grew up in the church” as a preacher’s kid. I’ve been guilty of thinking I’ve never done anything that bad. When this realization hit me, during the chorus of “my chains are gone I’ve been set free” I immediately repented, somewhere on a nearly deserted Texas highway.

Book Review: Sing Over Me

A Rose by Any other Name

No Shame in the Light