On this day, eight years ago, I woke to Peter’s phone call saying he had been bumped from his flight (the Army wouldn’t let him 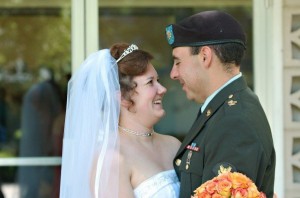 off early the day before to get to his own wedding). He made it, just in time – though I guess we would have stalled the ceremony for him. The ceremony and reception are a bit of a blur.

We reached a point in the last year where we have been together more than half our married lives. With two deployments (one 15 months, one 12) and one TCS (which lasted 9 months, the terminology difference is just financially based), this hasn’t always been so. Separation kept us from celebrating anniversaries (and other milestones) together in years past. Even when we’ve been in the same place at the same time, complications can arise, like Peter’s hospitalization following a wisdom tooth extraction two years ago (for which he stayed in the hospital longer than I did with both c-sections combined, but I’m not bitter). Two duty stations on two continents and two beautiful children have blessed our marriage with innumerable adventures.

Dietrich asked me if we were going to invite everyone and have a party for our anniversary. I didn’t know who “everyone” could be. He said, “like at the church,” and I was speechless. Part of me wanted to answer that we don’t celebrate anniversaries the same way as birthdays, but knowing the many “whys” that would follow, and wondering the same thing myself, I just said, “I think we will probably just go out on a date.” We tend to commemorate the big anniversaries with parties and gusto. Everything leading up to those big years gets overlooked. Some of those little years make up the glue of the big years.

Dietrich may be onto something. This weekend, I’m going to make an anniversary cake with eight candles. We’re going to rejoice for all we have endured, both good and bad, so far in our years together. We’re going to pray for the years to come. Most importantly, we are going to celebrate our now.

In Memory of Grandma

10 years of Growing up in the Lord
Tags:family