A friend of mine had two “way back time machine” status updates this past weekend, focusing on the Story behind Easter. Each of these posts created vivid images with overwhelming emotions. Some of these thoughts I’ve had myself, but not as eloquently stated. Here is the first, fixing ones thoughts on crucifixion Friday: 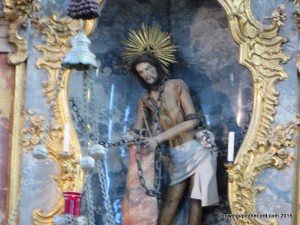 It’s Sabbath, a day for resting and refueling. Eleven men and a handful of women are not resting, but mourning. They had followed a carpenter’s son, their rabbi and mentor around on his ministry tour for three years and yesterday he was crucified. He was innocent but the government and the religious leaders found a way to get him on that cross. Now they’re wondering: were we hopeful for nothing? Was he really the messiah or do we now have to wait for another? He had said something about resurrection, but it all seemed so empty just now. They had to borrow a tomb from a rich friend and the Romans had a guard posted so nobody could get in. Tomorrow, the women will go and prep the body with herbs and flowers. Tomorrow, they thought, we’ll have closure.
Everything these followers believed about their Messiah for the previous three years suddenly resonated only more questions. Shuffling through memory files, trying to remember what He had said, attempting to make sense of it all with only human eyes, ears, and understanding left them wondering – and wandering (they all scattered after Jesus was taken prisoner). We only know of one that remained close, even watching as his friend died, the apostle John – the disciple Jesus loved, His best friend on the earth. Jesus made sure that John would look after His mother, and that His mother would regard John as herown. As indescribable as each day must have been knowing she was the mother of God’s son, how much more so that God’s son used some of His last words, last energies, to make sure she was not alone.
In each of their scattered corners, they honored the Sabbath. How rote those prayers must have seemed. How empty and silent that Sabbath was compared to previous ones of miraculous healings and confrontations from the Pharisees. The women waited impatiently to tend to the Lord’s body. Here is my friend’s status regarding that first day of the week:
It’s before dawn, and you’re expecting to have to ask a few Roman guards to move the burial stone so that you can prepare the body of the Master. You’re going over a well-rehearsed…do you see the angels? Do their words even make sense at first? Risen? He’s not here? You run back to tell the others, not noticing if any of the other women are following you. Peter and John follow you back after a hurried half-coherent explanation of what you and the others witnessed. Are you John? You reach the empty tomb first but hesitate at the opening. There’s no smell of death, no shape of a body on the slab. You don’t yet know it, but in your old age you will be witness to wonders the rest of the believers are still waiting to see. Are you Peter? The younger man outruns you but, true to your nature you walk boldly into the tomb. Do you feel the cloth that was covering His body? Do you pick up the cloth that was wrapped around His head? Has it sunk in quite yet what you are a witness to? Are you Mary? Softly weeping, searching around for tracks or drag marks, you run into a man. His skin is smooth and clean, His long sleeves cover the holes in His hands. Do you fumble for the words, asking this man where the Master is? You’ll forgive him if he’s moved the body but you must know where your friend has been put. Do you recognize His voice when He calls you by name? Look up into His eyes and know He is worthy of worship, clasp His nail pierced hands, now healed. His head and face have a glow to them. He tells you to wait just a little while, wait with a heart bursting to tell everyone you can find that Jesus has been raised from death!
Jesus remained on the earth for 40 days, until He ascended to Heaven. For 40 days, His followers reveled in restored hope that was lost that Friday. With Sunday, all hopes and dreams were renewed. With Sunday, they rejoiced. With Sunday, they thought they understood. I imagine that confusion of Friday returned as they watched Jesus disappear into the sky on a cloud. “Now what?” Yet they believed He would return, so much that they were watchful, so much that some quit their jobs – believing that return was imminent – a behavior which had to be corrected.  (We should be as eager, while continuing to live in and not of the world). Finally, ten days after the ascension, the day of Pentecost. To the Jew, this day celebrated the handing down of the Law to Moses on Mt. Sinai following the Passover and exodus from Egypt. To the Christian, this day marks the beginning of Christ’s church. On this day, the apostles were given the gift of the Holy Spirit, the Comforter. Truly on this day, everything they had heard and witnessed made sense. They “got it” – It “clicked”! We benefit from their accounts, seeing the whole story unfold in Scripture.
I heard a sermon, taken from the following poem. When we face an uncertainty, when our hope seems lost, when our dreams appear impossibly dashed, consider that Friday. God truly plans for our bright future, working all things together for good. Though not always an earthly reward, He remains faithful to His promises.

Through the Mystery of Uncertainty, Just Breathe