In recent weeks, I’ve seen a theme emerge in the articles posted by the pages I follow and in my own Bible study. When I get deeply honest with myself, this message began during 2020, with times of isolation and separation. I draw comfort and encouragement from God’s word, but also from gathering with His people. I spent a portion of last year feeling incomplete and alone. I wonder if that is what Elijah felt like in 1 Kings 19. 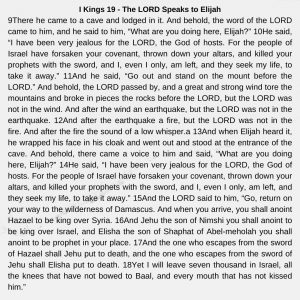 Just before this encounter, Elijah had defeated the prophets of Baal on Mount Carmel, enciting additional anger from queen Jezzabel. He ran away, even though he had just witnessed – and participated in – a mighty demonstration of God’s complete power. While he’s running, angels bring him food and tell him to rest. Sometimes a nap and a snack is just the right medicine to renew our strength. The angel told Elijah to do this twice, after which, he had the strength to climb the mountain and meet with God. Our physical needs must be met before we can attend to spiritual ones. Are you in need of a nap and a snack?

Just after this encounter, Elijah meets Elisha, who will take up his mantle with a double portion as God’s mouthpiece in Israel. Elisha followed Elijah closely for several years. Can you imagine the conversations between teacher and student as they served God throughout Israel? Elisha sees his mentor and friend disappear in a chariot of fire, then picks up Elijah’s cloak, literally and figuratively, to carry on. Elisha’s servant didn’t seem to have quite the same faith as Elisha did following Elijah. We see this in 2 Kings 6:15-17, “When the servant of the man of God rose early in the morning and went out, behold, an army with horses and chariots was all around the city. And the servant said, “Alas, my master! What shall we do?” 16 He said, “Do not be afraid, for those who are with us are more than those who are with them.” 17 Then Elisha prayed and said, “O Lord, please open his eyes that he may see.” So the Lord opened the eyes of the young man, and he saw, and behold, the mountain was full of horses and chariots of fire all around Elisha.”

The Lord fights for us. He’s given us everything we need, yet we are often distracted or forgetful when it comes to accepting and appreciating those blessings. We all battle this in different ways, my struggles may be nothing like yours, but we each have the opportunity to grow through them. Open your eyes to the army fighting for you. Open your ears to the Whisper of Hope. You won’t be disappointed with what God does next.

The War Zone of Parenting

Tale as Old as Time