Psalm 130
A song of
ascents.
1 Out of the depths I cry to you, Lord;
2  Lord, hear my voice. Let your ears be attentive to my cry for mercy.
3 If you, Lord, kept a record of sins, Lord, who could stand?
4 But with you there is forgiveness, so that we can, with reverence, serve you.
5 I wait for the Lord, my whole being waits, and in his word, I put my hope.
6 I wait for the Lord more than watchmen wait for the morning, more than watchmen wait for the morning.
7 Israel, put your hope in the Lord, for with the Lord is unfailing love and with him is full redemption.
8 He himself will redeem Israel from all her sins.
I first became familiar with the psalm through The ZOE Group’s version of “Amazing Love (You Are My King)” when part of the psalm is recited between the final verse and chorus. Initially, the part I paid most attention to was in verses 3, 4, and 7 – after all, that is what the song is about –
God’s amazing love. Through many prayers and deployments and waiting for answers, verses 5 and 6 began to resonate within my soul as well. However, until one really understands the role of the watchman, the power of this verse isn’t recognized.
The prophets are referred to as watchmen throughout the Old Testament. Other places in Scripture speak about the watchmen on the wall. These men kept watch for anyone approaching the city and sent out a warning of danger. They were the first responders to intruders. Cities stood or fell based on how quickly they acted. He couldn’t fall asleep on the job (or at all, until morning), figuratively or literally. The role of the watchman continued, becoming somewhat of local law enforcement through the Roman Empire and Medieval times, and even later in some parts of Europe. The watchman (or men) would walk along the wall and sing on the hour. If you remember the line, “one o’clock and all’s well,” from the animated Robinhood or perhaps other occurrences, that is a reference to the Night Watchman’s Hour Song. He kept vagrants and drunkards off the streets, warned people in the event of fires, and lit the lamps along the wall.
While living in Germany, we attended the Euro-American Retreat in Rothenburg ob der Tauber. There, the history of the night watchman came alive for us. This city remains one of the most well-preserved walled cities and, as a special tourist treat (or trap), offers a Night Watchman’s Tour. The retreat was in November, Madilynn had just turned one, and it was bitterly cold the afternoon of our group’s tour. I didn’t hear as much as I would have liked, but the beauty and preservation of the town and the storyteller’s presence make an impression.
Our second favorite place in Germany, evidenced by going three times in three years, is Trier, the oldest city in Germany. Trier contains the largest remnant of a Roman city gate north of the Alps, known as the Porta Nigra. Portions of the city wall still exist. In one section, you can see the holes used to shoot arrows at oncoming intruders (which we learned from our Rothenburg tour). Below, Dietrich points at the hole, though he’s shorter than the archers would have been. 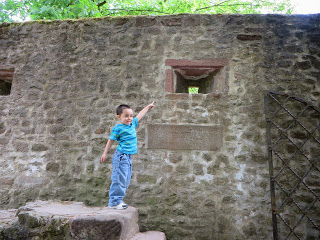 I serve a Lord and Savior that keeps no record of my sin. He gives full redemption, a clean slate. He never sleeps on the job and asks only that I put my hope in Him. Watchmen waited for the morning because, at dawn’s light, threats of danger decreased. The cover of the night could hide the enemy whereas daylight could expose an attacker. I wait for the LORD, my whole being waits, and in his word, I put my hope. To carry the faith and hope of the watchman, would be to truly wait on the Lord.

The Power of Wind

A foolproof investment for the future