That’s miller, NOT killer though you wouldn’t know the difference by the way the kids act when they see one. Not that I can blame them. I won’t disgust you all with pictures – you can look them up for yourself if you aren’t fortunate enough to live in the migratory path of the annoying critters. Miller moths (also known as army cutworms) do not eat clothing, but they leave a nasty residue on anything they touch. They dive-bomb toward a light, noise, and commotion so riled up children isn’t the best situation for getting rid of them. This mommy is a superhero though, just like my mother’s day gift says, as I dutifully rid the bedroom and bathroom and any other area of the silly creatures before my children are dive-bombed too often or manage to accidentally swallow one of the filthy bugs. 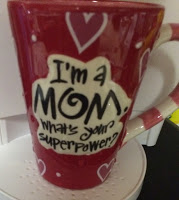 Since we are a homeschooling family now, and we like to learn things, I’ve been reading up on the Miller Moth – which is actually an Army Cutworm in this region of the world (the miller moth species is something completely different and native to Europe). During the spring months, these critters hatch in the lower elevation farmlands, then migrate to higher elevation and cooler temperatures for the summer. They come indoors because they are attracted to light and often come into houses at night. They can enter nearly any opening, such as a chimney, vent, doorjamb, or any unsealed window or door. Though a nuisance, these pests are not considered harmful. Pest control experts have difficulty getting rid of them as a new batch shows up the next day. However, in their migrating process, these icky insects are one of the richest food sources for the brown bears of Colorado because their bodies are more than 72% fat.

I am nerdy enough to enjoy sharing these fun facts with you. Feel free to pass on the knowledge on this Wacky Wednesday.

Book Review: Sing Over Me

The Music of My Heart