Life isn’t fair. I know because my mama told me so when I was about two or three years old. Too harsh, you might think, but in her defense, I was verbal by two and already opinionated. I could have been whining or complaining at the time. I think I whined a lot in my younger years and I still like to complain. 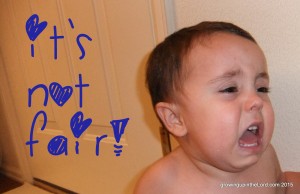 Life isn’t fair when illness rips through a person’s mind and body, leaving them unrecognizable to those around them.

Life isn’t fair when all a grandparent wants is to see their great-grandchildren, but their time on earth ends before this dream becomes a reality.

Life isn’t fair when all a couple wants is to have a child, while all around them people are killing their unborn children or abusing and neglecting their children. Surely such people are less deserving. Why do they receive this blessing when they clearly do not appreciate the gift?

My own loss remains the single greatest traumatic event in my life. However, I had Dietrich to keep me from wallowing and we had just moved. Sometimes, I still feel the weight of that loss, typically about this time every year. My yearly “funk” had just begun when my sister told me good news, too soon to be followed by devastation. My heart hurts for her in such a big way. I cry out through the unfairness. I believe my sweet, baby sister should be exempt from such heartache and pain.

My darling sister is the most tender-hearted of us. When we were kids, she would cry when everyone else was in trouble. She loves in big ways and continuously surprises me with her generous heart. If ever someone should be exempt from losing a child, it should be my sister. It isn’t fair.

One thought that brought me comfort after my own loss was picturing my Grandpa and his first wife, a grandmother I never knew, with my baby (in June, my Grandma was added to this image in my head). He always wanted many great-grandbabies and now he’s surrounded by them in heaven.

As I searched for picture ideas for this post, I found this. Maybe it will encourage you as it did me.

A new and different kind of Joy.