This book is only four short chapters, but rich in content. The account of Ruth takes place during the time of the Judges. For the purpose of my book review, I’m going to break the sections down into seasons and go from there.
Winter – Israel faces famine. Naomi’s husband and two sons die. She is left alone with her daughters-in-law. When she hears that the Lord has come to the aid of Israel, she prepares to return home, and they prepare to go with her. Naomi does not wish for them to continue to live in grief and encourages them to go back to their own homes and find new husbands and live full lives. One complies. Ruth, however, remains devoted to Naomi, declaring allegiance not only to Naomi but also to the God of Israel (1:16-18). Even as Naomi declares her friends should call her Mara (meaning “bitterness”), the lives of these two women is about to change drastically for the better.
Spring – Ruth begins gleaning in the fields to provide for Naomi and herself. The field she finds belongs to Boaz, who happens to be a relative of Naomi’s husband. Boaz shows kindness and protection to Ruth and Ruth returns the same kindness through obedience and respect. Naomi tells Ruth how to go about asking Boaz to fulfill his role as kinsman-redeemer, basically encouraging her daughter-in-law to propose marriage! Ruth continues in steadfast obedience and follows Naomi’s directions.
Summer – Boaz, though surprised, accepts Ruth’s proposal. However, there is the glitch that a closer kinsman-redeemer would have first “dibs”. Boaz approaches the relative, in the presence of the elders and the relative relinquishes his claim. Ruth and Boaz marry, the people rejoice and pronounce blessings over their union.
Autumn – An aged Naomi holds her grandson, who is the grandfather of a future King. The end of this book is a perfect segue into the coming changes as Israel demands a king.
Other observations: I noted previously that Rahab is included in the genealogy of Christ. What I didn’t mention in that post is that she is listed as the mother of Boaz. I became very curious about this, as Matthew’s Gospel is the only place this is mentioned. Two main theories emerged: 1.) that Rahab and Ruth both conceived at older ages (like Sarah) or 2.) that some generations were left out of the list. Whether it’s one or the other, or some other explanation, I think the point of the Word is simply that God can use ANYONE to bring about His will, including a foreigner who used to be a prostitute and a foreigner who was a Moabite (Moabites were prohibited from the temple up to the tenth generation). Both of these women are in the direct lineage of Christ.
Sometimes I feel overwhelmed in my current season of life, but I am thankful for the examples of women in the Bible, as well as women in my own life, from whom I can glean wisdom and lean on for support. 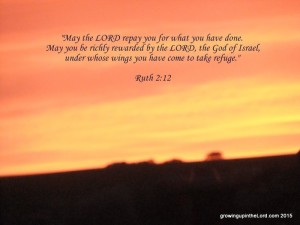 Take up your Sword