Skip to content
We’ve had a long week, month, several months, as you know if you follow me at all. After a long search and a lot of prayers (and many prayer warriors), Peter has a job working for Child Protective Services. Right now, he is living out of a hotel during the week, while we stay with my generous father-in-law, waiting on the best available rental option in town to be ready for us (in a town about two hours away). After reaching a point of doing all I could do here while he was doing all he could do there, I decided I really needed to make a trip to my own parents’ house. I hadn’t seen them in about a month and we’d left several things there when all we had was a tiny rental car. On the last trip, I just didn’t think about consolidating anything or going through stuff to bring back, because there seemed to be no rush. Well, now I had a reason to rush. As much as one can rush a trip from the panhandle area of Texas to central Texas. Dietrich spent the entire drive asking how much further, even though he has a Leap Pad that was fully charged.
I’ve spent so much time so far away from my family the past several years. I am so glad to be back in the same state, within a day’s drive. I guess I should say “we’ve been away from our families” – either way, I’m very glad my children are going to
have (Lord willing) lots of time with their extended family. I enjoy so many things about “going home”. I feel like my parents are more than just the people who raised me, they are now also friends, mentors, and confidants. Likely, I didn’t always appreciate their advice or wisdom when I was young, but I do now. I also realize how strong they had to be to withstand the trials that come with being a preacher and his wife. They had to be full-time secret keepers while also holding to Biblical truth no matter what. Some preachers’ families don’t survive that kind of storm. During our growing up years, things were often tight financially though we always had everything we needed and many times we received special things we wanted for birthdays and Christmas. My parents have been more blessed in recent years and have extended those blessings to their children and grandchildren. I am thankful for the love they shower on my kids (and me and Peter) both in affection and in material blessings. I am most thankful for their presence in our lives. Whenever I am home, my dad lets me sleep in, as late as I can. He
even makes coffee for me, even though no one else drinks it. He takes the first shift with the kids because he knows I don’t ever get to sleep in or have a morning to just lounge. Truthfully, most of the time, I don’t sleep much later than 8:30, but the bed is so cozy, I don’t want to move, especially when I know everyone is taken care of and enjoying Granddad.
Running away was really the best thing to do, since I couldn’t do anything else where I was. While it’s not always the best solution, this time, it was the right medicine. Our illness turned out to be the homesick blues. 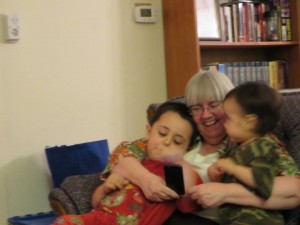